The award is designed to recognize law enforcement officers and others who have made significant contributions to, or outstanding achievements in, highway safety over the course of their career. 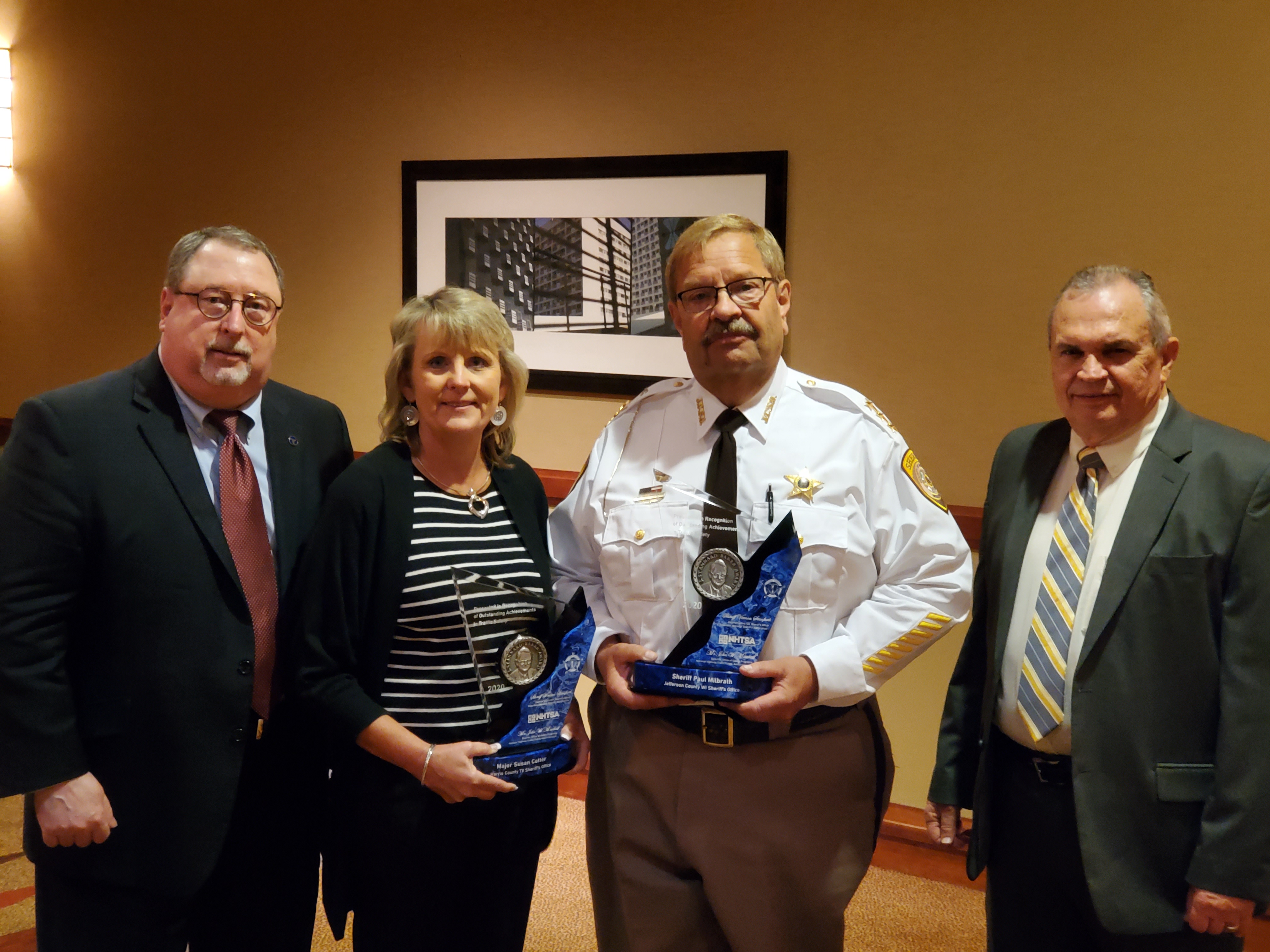 Pictured, from left: Wil Price, NHTSA; Major Cotter, Harris County Sheriff's Office; Sheriff Milbrath, Jefferson County Sheriff's Office; and retired Sheriff John Whetsel, Oklahoma County Sheriff's Office
Sheriff Milbrath has been a strong advocate for traffic safety throughout his 41 years with the Jefferson County Sheriff’s Office. During his career, the Sheriff’s efforts have gone from educating youth via bike rodeos to reducing crashes in his jurisdiction to most recently leading refresher courses for senior drivers. His countless, successful enforcement efforts and initiatives, as well as the relationships he has brokered in his fight to reduce fatalities, have earned Jefferson County the reputation of being a place that has safe roads. Most notably, Sheriff Milbrath has spent his career engaging his community to find more ways to serve and protect his citizens.
Major Cotter has been a law enforcement officer for over 30 years and has dedicated her entire career to traffic safety. Highly accomplished in many areas of traffic enforcement, including as a drug recognition expert (DRE), Cotter worked her way up the ranks to become the first female Patrol Major in the history of the Harris County Sheriff’s Office. What stands out most is her ability to lead and educate others. Cotter is a gifted training instructor for both SFST and DRE and has taught classes all over Texas. While she’s made a positive impact on thousands of law enforcement officers and citizens, her professionalism and expertise have earned her respect from both her peers and her supervisors.
The award winners were flown to Phoenix, Arizona to attend NSA’s Annual Conference where they were acknowledged for their accomplishments and received their awards. Sponsors of the J. Stannard Baker Award include the National Highway Traffic Safety Administration (NHTSA) and the Northwestern University Center for Public Safety.

The deadline for submitting your application for the 2022 J. Stannard Baker Award for Highway Safety is February 7, 2023.

To submit your application, click here.  If you have submitted in the past, please consider submitting again!

Sponsored by NHTSA and Northwestern University Center for Public Safety.

The National Sheriffs' Association is dedicated to promoting exemplary performance and creative approaches to enforcing traffic safety within the office of sheriff and those who support their efforts. Through partnerships with the National Highway Traffic Safety Administration, and Northwestern University Center for Public Safety, and OnStar, NSA works to recognize excellence in local community programs and national attention through the J. Stannard Baker Award.

Development of Unique Law Enforcement/Community Traffic Safety Programs: This is to recognize an employee (officer, deputy sheriff) from an Office of the Sheriff who has shown unusual initiative and imagination in developing and promulgating traffic safety programs over the span of a career. A heroic or meritorious service act involving a traffic safety function is acceptable in this category.

Special Award to Governmental or Private Individuals: The award panel may grant a special award to a person who has made an outstanding contribution to highway safety over the course of a career.

The award is managed by the National Sheriffs' Association. The selection panel is made up of NSA's Traffic Safety Committee which may or may not grant awards, at its discretion, or present special awards, as merited.

The award recipient will be notified by June 1 each year, and will be invited to attend the NSA Annual Conference where the award is conferred. Travel and lodging expenses are provided for the recipient.

Candidates for the award must be a full-time paid officer or deputy sheriff from a city/county office of sheriff with a career dedicated to traffic safety.

The employee or civilian being nominated must have contributed to the highway safety program in their governmental agency over the course of a career. Long years of service alone are a consideration but not a determining factor. Equally, short service may be considered. However, the quality of the service or program is the essential factor.

An individual from either the public or the private sector who has made a significant contribution to highway safety would also be eligible for the special award. This award is designed to recognize the individual efforts of government employees, such as traffic engineers, educators, judges, prosecutors, motor vehicle examiners, etc., who have made outstanding contributions to highway safety programs and issues that benefit law enforcement and the office of sheriff.

Nominations must be submitted by February 7, 2023, to:

Who Was J. Stannard Baker?

This lifetime achievement award is named to honor J. Stannard Baker, a former physics professor at Northwestern University who made significant contributions to highway safety. A pioneer in crash reconstruction investigation, he developed this subject into a science by applying the laws of physics and developing mathematical equations to assist law enforcement officers in their investigations. The first books on crash reconstruction investigation were written by J. Stannard Baker and are still in use today.

<< Back to Traffic Safety